THE FRED VOGEL SOUND is an ongoing life project for producing, composing and performing sweet and dirty pop tunes, as well as music for film/TV and video games.

Starting in 2021, FRED VOGEL is performing his lounge/chill/jazz/groove instrumental compositions live. Using loops and prerecorded tracks together with live performance of guitar/bass and keyboards - the performances provide a background atmosphere for cafés, parties, art openings and other gatherings.

All works (music & lyrics) are registered with Koda and NCB.

Having grown up in New York City, FRED VOGEL relocated in 1979 for a brief period to his native Stockholm and became a singer in the Swedish band SMISK (English: Spank) together with Mats Burman, Lars Kronlund, Joakim Stokstad, and Per Ingels. They toured the Stockholm area and released a single on EMI in 1979 that recieved airplay on public radio until the band broke up.

Back in New York FRED VOGEL formed FANTASTIC LIFE and THE K-CLUB in New York City in the early 1980`s. The bands were created and concieved together with legendary multi-artist Simon Kahn, and cinematographer Bob Gorelick. They performed at venues such as CBGB'S OMFUG, Peppermint Lounge and Tompkins Square Park.

In the mid 1980`s Fred Vogel left New York again to try his luck in his native Stockholm and together with drummer Tomas Rudal, Andreas af Malmborg, Jock Millgård and singer Pia Kalischer they formed the bands TA-DA and RUSSIANS PUMP MOSTOIL. These Swedish bands played mostly on the art club scene.

In 1986 he relocated to Copenhagen, Denmark - where he finally settled down.

In the 1990`s Fred Vogel had local underground bands in Copenhagen. The names of these bands were THE OLOF PALME GROUP and NO DADDY NO.

As a true poly-linguistic creature, Fred Vogel sings in his native languages (Swedish, English and Danish) as well as exploring instrumental dimensions in his work.

In the period 2013-2018, FRED VOGEL was  playing the local singer-songwriter scene in Copenhagen as an acclaimed one-man show. His Swedish-American accent mixed with the Danish language and a light-hearted approach combined to make for a highly engaging and emotional experience. The genre for the one-man show can be described as "Lounge Jazz Poetry". 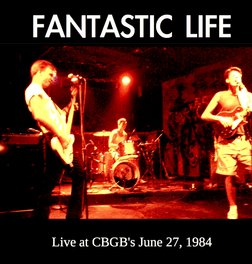